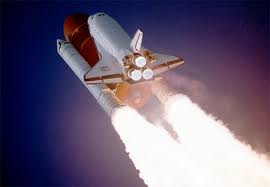 There we have it, the final launch of the Shuttle Program. They got down to 31 seconds on the countdown and paused due to a minor error. For a second I thought they were gonna scrub the mission. A couple minutes later my fears were put to rest as the countdown started up again.

I held my breath the last few seconds. The flames started and history was made. It was a wonderful moment that kept me on the edge of my seat for the next five minutes, waiting for the boosters to come off. It was sad and wonderful at the same time. I thought back all those years ago to the first launch and for the first time realized what a defining moment this really was.

The Shuttle Program dominated the space race and defined our position as leaders in orbital science. It makes me proud to know that we as a people have come so far in the last hundred years. The Wright Brothers had no idea what they were starting and where it would lead. Today isn’t the end of that journey nor is it the end of our advancement in Space. As we go forward I look with anticipation to see what we’ll come up with next.