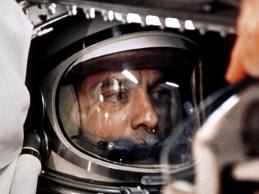 Thus began our journey into the great beyond. Since then we have been to space countless times, landed on the moon and dotted the skies with tens of thousands of satellites.

Ten years later, he commanded the Apollo 14 mission, and became the fifth person to walk on the Moon. When I think of American hero’s this man stands near the very top of the list.

His accomplishment is often overshadowed by Neil Armstrong’s first steps on the moon and the fact the Russians put a man into orbit shortly before his flight, but in my mind neither of those tidbits detract from what he did. My thanks and admiration goes out to Alan Shepard for bringing our nation into the space race and laying a foundation that forever changed our civilization.